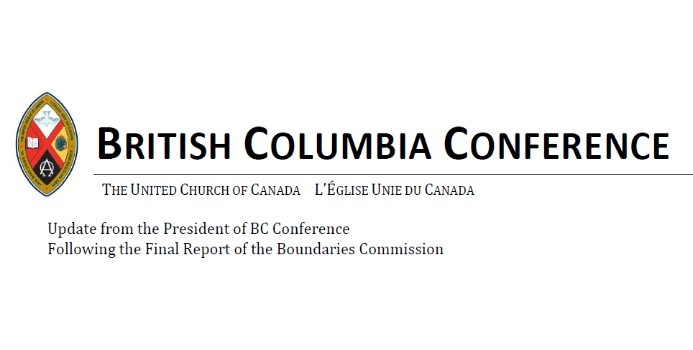 Dear friends in Congregations and Communities of Faith across BC, stretching into the mountains to Banff, and reaching north to Whitehorse,

What an interesting time to be part of the Body of Christ. We are being asked to be flexible, thoughtful, grounded in our faith tradition, and courageous in our walk together, following Jesus.

Now that we know what territory the proposed Region 1 will gather into one body, we can begin to make some headway on the other questions that still remain, and begin to plan for the transition from life as Presbyteries and Conferences, to our new life together as a yet-to-be-named Region 1. To that end, let’s remember from the outset that Region 1 is not just a “reconstituted BC Conference with Whitehorse and Banff appended” but that we are being invited to welcome one another with the welcome of Christ, into a new structure and way of being in ministry together.

The Conference Executive has had a few extra (electronically hosted) meetings this spring. Two of them were in service of responding to the first report of the Boundaries Commission, and you already know the fruits of that work. The last meeting was just last Thursday, March 1, two weeks before our regularly scheduled in-person meeting.

The primary purpose was to move some of our routine business along electronically, so that we can maximize the time we have together to be good governors of the mission and ministry of this part of the church in our current shifting context.

The Executive also approved a piece of work regarding the process for provisional appointments of Region Executive Ministers (REMs). This was in response to a letter from the General Secretary, General Council to all our Presbytery Chairs, as well as Jay Olson (President-Elect) and myself.

Specifically, we have formed a small task force made up of four members of the Executive (myself, Jay Olson, Jean Macdonald and Ray Jones) as well as two Presbytery chairs (Teri Meyer from Prince Rupert Presbytery – who serves in Terrace, a 16 hour drive from Whitehorse – and Greg Powell from Kootenay Presbytery – who serves in Castlegar, a 6 hour drive from Banff). To guide its work, this group has Terms of Reference, some foundational principles, and the General Secretary‘s time line (which is a tight two weeks) before a provisional appointment of the Executive Minister for Region 1 is made.

We believe that the General Secretary expects that each REM will be shared by two or three Regions. We will enter negotiation guided the following principles:

* That Region 1 will be best served by a Region Executive Minister who is directly accountable to the governing body of the Region, with appropriate “dotted line” relationship to the Denomination;

* That at least during the transition, Policy Governance will continue to be the model of governance used in Region 1;

* That flexible and creative use of financial resources may be used to achieve the optimal relationship with a Region Executive Minister;

* That the work of the Task Force should be grounded in theological reflection on the life of the church in this moment of transition;

* That communication with the Region as we progress will be undertaken, as well as consultation, as possible, given the short time line.

The Task Force’s aim is to be faithful to the communities of faith within the bounds of the proposed Region 1, to achieve the best possible outcome for a smooth transition, and a longer-term plan that carries us forward into God’s future in mission.

To date, we have had two meetings, and have begun work on further discernment regarding guiding principles (from what the Executive offered as a beginning), consulting with the General Council Office regarding Job Descriptions for REMs, theological reflection and prayer, and orientation to the task before us.

There are many still-unresolved questions about the finances of the new structure, and how those realities will impact our Region, its ministry, staffing and life. I would ask you to be patient, trusting that information will begin to flow more freely, now that the Boundaries Commission has completed its work.

Our Conference Executive Secretary, the Rev. Doug Goodwin, is in meetings at the General Council Office with his colleagues from across the country as I write, and hopes to have greater clarity this week in order to make plans for the months ahead. Both the Conference Executive, the governors of the ministry of the Conference, and our Executive Secretary, to whom the work of managing that ministry is delegated, are committed to healthy process and clear communication as we continue in this process of transition.

This won’t be the last time I offer a word of sincere thanks to our Conference staff members, both in the office and deployed in our Presbyteries, for their commitment to the ministry of the United Church here in BC, and for their faithfulness in carrying on despite some uncertainty in their personal circumstances. But it is heartfelt!

Anyone who has undertaken an amalgamation knows that the old identities must be released and grieved for the new identity to be fully embraced, and so as we move toward the final General Meeting of BC Conference, we will be attentive to the sorrowful letting go and the hopeful embracing.

This is an awful lot of information to absorb… bless you all for your faithfulness to Christ’s church and thank you for your partnership in service in God’s world.